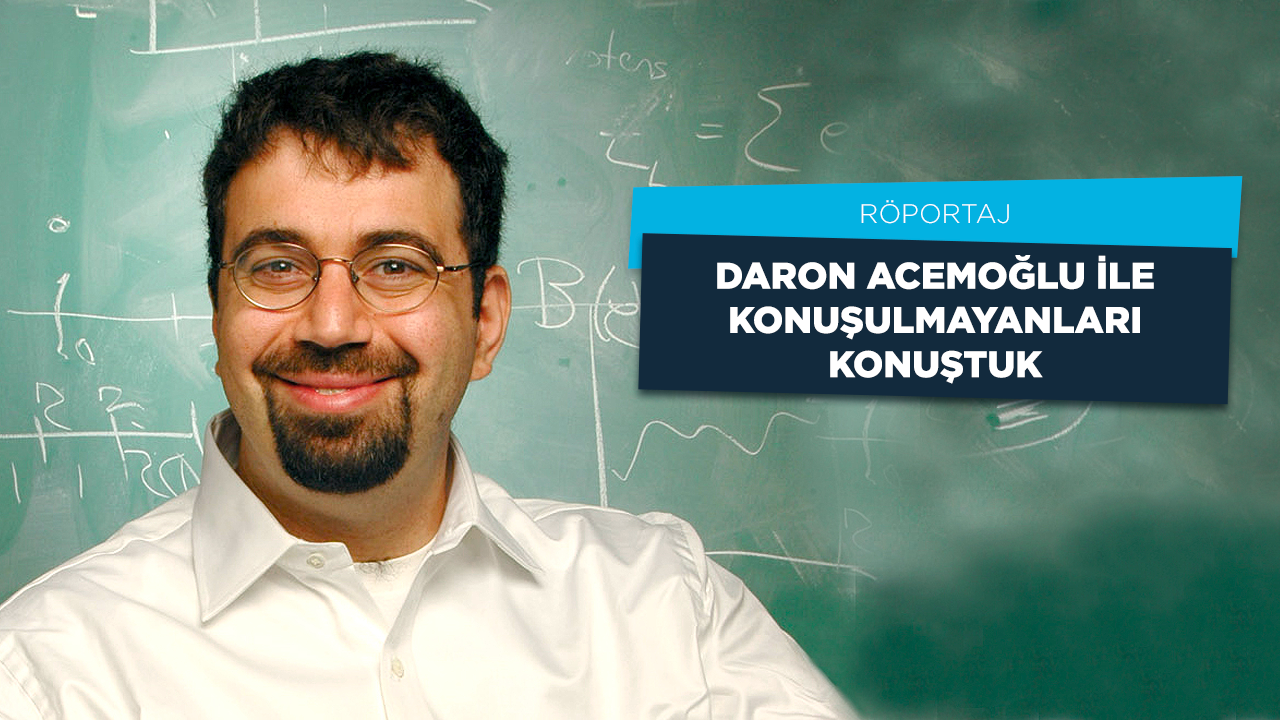 Başlangıç Noktası: Certain arguments about breaking up big-tech-companies have arisen; what would the implications of such an action be? Do you agree with the fact that at the platform level, competition confronts the existence of large returns to scale and/or network externalities, leading to natural monopoly situations and a winner-take-all scenario? What kind of problems do governments face as we are going into the era of mega-companies?

Prof. Dr. Daron Acemoğlu: The facts are clear. The level of concentration, for example as measured by the share of the largest few companies in an industry, has reached an all-time high in both the United States and Europe. The world has never seen anything close to the size of the largest 5 companies today, Apple, Alphabet, Amazon, Facebook and Microsoft. The reasons for this are less well understood. Some of this is because of “winner take all” nature of platform competition in the technology area. But my sense is that this is not the most major factor. The failure of antitrust on both sides of the Atlantic, but especially in the United States, is also critical. In the past too very large companies came to dominate their industries and large parts of the overall economy, most notably Standard Oil, AT&T and Microsoft in the 1990s, and they started stifling competition. The Department of Justice did take action and forced these companies to break up into smaller ones or prevented them from fully using their market power. This is completely missing today. My concern is that the domination of large companies implies not just higher prices for consumers but significantly affects the types of technologies that get developed. Dominant companies tend to block technologies that compete with them and gobble up small companies that could develop into rivals. This may mean less technological diversity, and ultimately listed logical change. But the solution is clear: more vigorous antitrust action.

BN: Do you agree with the fact that we are at the edge of a new phase in history due to emergence of technologies such as AI? To what extent are these technologies capable of disrupting our current economic models and markets?

DA: I think the implications of AI are often misunderstood and greatly exaggerated. First,the capabilities of AI both today and in the near future are much less than its proponents claim. Certain tasks and some jobs will be replaced by AI-powered new technologies, but in the near future, this will still tend to be the minority of jobs in the labor market. This is because almost all of the effort at the moment are directed at “narrow AI” which does not have the capability to replicate and compete with what humans do. This is for the simple reason that “broad AI” that could bring general intelligence is no more than the subject of science fiction at the moment. This may change, but probably not in our lifetimes.

Viewed in this perspective, AI is just another automation technology, and the world economy has gone through several of those, starting with the innovations in spinning and weaving technologies during the British Industrial Revolution, continuing with mechanization of agriculture in the second half of the 19th century and the first half of the 20th century, and more recently a variety automation technologies starting with numerical control machines, computerized numerical control, automatic industrial machinery, and robotics. The reason why we should care about the trends in AI is that automation technologies in general have important, and sometimes disruptive, implications for the labor market. They can reduce wages for certain groups of workers, they tend to reduce the labor share in national income (as they substitute capital for labor), and they do cause disruption. Therefore, even though there is no prospect that AI and other new technologies will make humans redundant, there is every possibility that AI will make some skills redundant, and may even reduce wages for a range of workers. Thus we need to be prepared. One important aspect of this is to identify which types of skills are complementary to AI and which types of skills can be replaced by AI. We then need to invest more in the complementary skills which will be useful for the careers of young workers who are investing in the skills and also to improve productivity by providing the types of skills that are likely to be useful for society to reach the full potential of AI technologies.

BN: It is often argued that new technologies might shrink the work force in such a case would a system like Universal Basic Income (UBI) be a viable option for the society? What kind of economic repercussions would it have? Folks like Bill Gates and Yanis Varoufakis [and many other] go as far as “taxing robots”… However, as per The Economist, “Waves of automation might necessitate sharing the wealth of superstar firms: through distributed share-ownership when they are public, or by taxing their profits when they are not.” How do you formalize the global workforce’s way out of this stalemate?

There is another important reason why universal basic income is a bad idea. With AI, robotics and automation, there will be a lot of workers who lose their jobs. We need to encourage them to get back into work in other occupations. That means work has to be rewarded. This is what negative income tax or earned income tax credit does. Universal basic income discourages work.

BN: When political power and economic institutions are more inclusive, nations prosper, as you and Prof. Robinson state in Why Nations Fail. However, the Internet eliminated many “gatekeepers” assigned to protect rules in place and created options that were then unseen. It disrupted existing economic value chains. Communication safety was breached by hackers. Blockchain put the future of the financial world [if not more] in question. Software erodes the product and service worlds. New industries and new ways of doing business create new options for countries that benefit from tax income and prevent countries which are not ready to give up this income. Political election mechanisms are tampered with by foreign countries… Are institutions of today well-equipped to facilitate the undergoing global technological revolution?

DA: Many people thought that the Internet would free communication and would be a force towards democratization, breaking the hold of authoritarian, autocratic leaders. I think the reality has turned out to be the opposite. The Internet involves an arms race. Whoever controls and invests more resources can derive an advantage. So authoritarian governments such as those in China and Iran have invested a lot of resources and thus stifled free speech and communication. The NSA in the United States has used the Internet and modern communication technologies to better snoop on people both domestically and abroad. We are now witnessing the next phase, where actors such as China and Russia, are using their resources in order to influence communication and civil society action outside of their borders. This is a very dangerous trend. Of course there will be new technologies, such as block chain, which will empower decentralized actors at the expense of states, but the arms race creates an advantage for states, such as China and Russia, which have resources and are willing to spend them in order to control information and stamp out free speech.

BN: A recent study published by the DIUx states that the Chinese government have used the open markets policy adapted by the USA to aid their own development through various technology transfer methods. The rapid advancement in technology, productivity growth and semi-closed market policy have benefitted China massively towards achieving their goal of eclipsing the US economy in the near future. Can one say that the extractive institutions have empowered China and inclusive institutions, as well as the liberal values, have weakened the USA, comparatively? Or, is china finally at the end of the road in terms of taking advantage of the liberal economic order to its own benefit? What is next for China then?

DA: China is still a low middle income country. It has not eclipsed the United States or Europe. But its size is a huge advantage; it enables China to emerge as a very powerful market, an assertive player in international trade and affairs, and a potential military superpower. I still stick to the prediction that James Robinson and I made in Why Nations Fail: the Chinese extractive path will run out of steam unless it manages to turn itself into an inclusive one (which seems unlikely).

BN: I want to follow up on my China question, your answer states that China cannot keep on with its current performance given the fact that its institutions are extractive. We know from your work that you favor inclusive institutions yet in your Foreign Policy article after Trump got elected you wrote the following “We have to keep reminding ourselves that we do not live in normal times, that the future of our much cherished institutions depends not on others but on ourselves, and that we are all individually responsible for our institutions. If we lose them to a would-be strongman, we have only ourselves to blame. We are the last defense.” this final paragraph of your article warns us about the vulnerability of inclusive institutions. You obviously state that such institutions would not be able to protect themselves faced with a predatory assault such as Trump’s, so where do we go from here? Facing both these internal and external threats, what happens to the country that we consider to be the Gatekeeper of the World order?

DA: Yes, I think no inclusive institutions are guaranteed to remain in their place. But I believe that the US is particularly vulnerable now because of polarization, alienation and discontent of a significant fraction of the population, and the specific combination of rhetoric and unscrupulous approach that Trump brought to the table. But I also think the US institutions were always weaker and perhaps less of a beacon for democracy and inclusivity than some other ones such as those that have achieved greater social mobility (Canada, Scandinavia and even Germany). But of course the US has a special place because of its size, wealth and military role.

BN: The health of Turkey’s economy is dire. Much of the growth of the last decade has been low-quality and pregnant with inefficiency. What is the way out of the upcoming recession [if not stagflation]? The trajectory of the recovery depends on the length of the preceding economic boom, some say; how long would it take Turkey to fully recover from the nearing crisis?

DA: There is no easy solution. The Turkish economy has structural problems resulting from its institutional slide over the last 10 years. The low-quality growth is a consequence of this. But over time these inefficiencies have led to a corporate sector that is vulnerable to bankruptcies (and this in turn creates dangers for the banking sector that is heavily exposed to this corporate sector especially to the construction and real estate industry). The best way to move forward is to improve institutions, make sure that Turkey does not suffer a run foreign capital, and restructure and recapitalize the corporate sector so that they are not brought down by their indebtedness.